Calle La Ronda is a narrow, flower-adorned, colourful street in Quito’s lovely old town. This was our favourite spot in the capital city of Ecuador – let me tell you why!

La Ronda in the Sunshine:

First of all, La Ronda is gorgeous. I can’t decide which picture to show you because I love them all. There are so many colours, potted flowers, and flags that line the cobblestoned semi-circular street. The vibe is super Spanish and you can really feel the influence here.

La Ronda gets the name from an old traditional song typical to this street. Calle La Ronda has always been a popular place for musicians and artisans, and young men used to come and sing under the balconies of young women. The men would sing for the fathers, and if the father approved, he would allow the man to come in for a chat before meeting the young woman. However, if the father disapproved, they would throw water onto the man. The songs these young men would sing were called “rondas.”

There are a lot artisanal shops on this street too – including jewellery, paintings and incredible chocolate.

Here are some of my favourite pictures from La Ronda during the day: 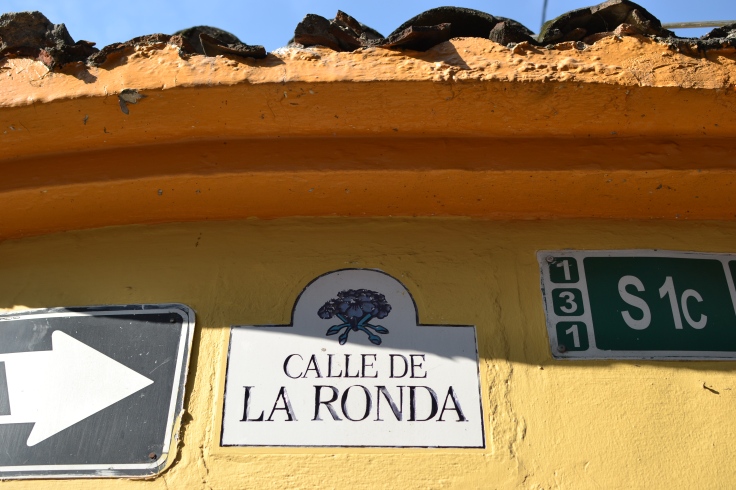 The next reason I love La Ronda is because at night time, the street booms with music from every shop and restaurant – it totally comes alive. There is a lot of hassling from the restaurant/bar workers to come & look at their menu, and to come inside – and they don’t just do this to tourists! Literally every person who walks by gets swarmed by persuasive restauranteurs speaking really quickly in Spanish.

We had a drink of the Canelazo as well, which is a traditional Andean sugary & cinnamon-y hot beverage. It is SO good – much better than it looks in the picture. They also sell giant empanadas here – Empanadas de Viento (which translating to “Cloud Empanadas”) – which are stuffed with cheese, puffed up, and covered in sugar. We haven’t tried these yet, but I hope to get some in our quick stop back into Quito!!

It is worth mentioning that Calle La Ronda was very safe at night. There are police and security guards everywhere, and there are cabs just waiting at the top of the street for people to take at the nighttime rates.  We did not spend much time going out at night, but here, it felt very secure and we had no worries.

Here is another picture of the night time. I will also included 2 videos of this amazing band playing classical guitar, ukulele and the pan flute! (Need to wait to upload when we get better wifi and it will actually upload….)