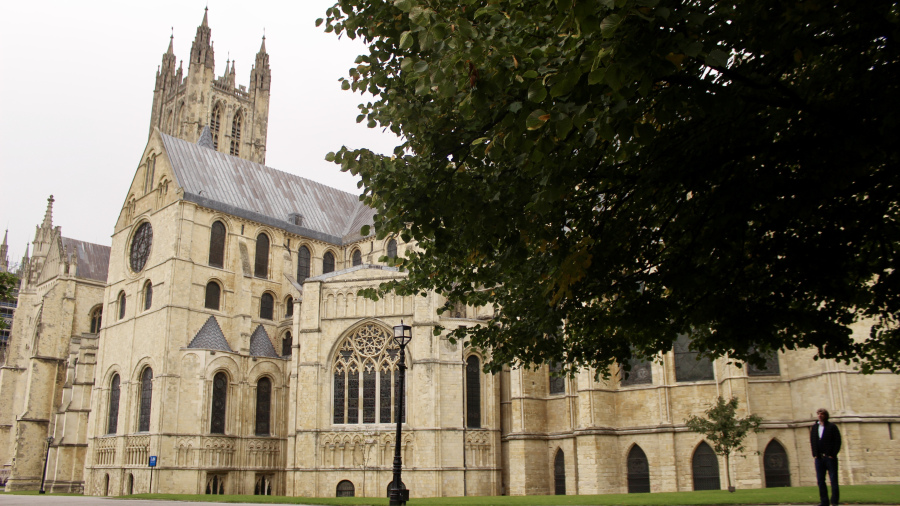 That’s right, folks! We have completed another day trip from London 🙂

So what brought us to Canterbury, you might ask? Well, I’m not really sure, to be totally honest! It was one of those towns where I recognised the name and it came up on lists of day trips from London, so I figured, why the heck not – let’s go for it.

When we got there, we headed straight for the tourist information office and asked what’s up. I don’t think the staff were expecting someone so unaware of the Canterbury attractions; I legit went to the desk and said, “hey there, we’re here for the day and have no idea what to do, guide us, kind sir.”

But before we knew it, we were toting the perfect little map, had a plan of action, and were ready to explore.

Here are a few starter pictures of things we came across through random stumblings: 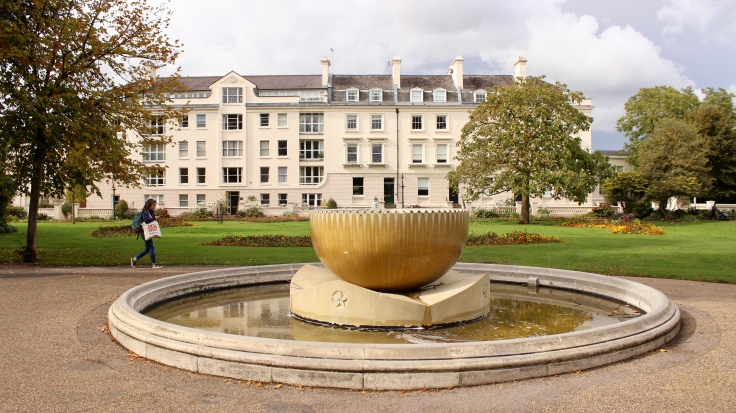 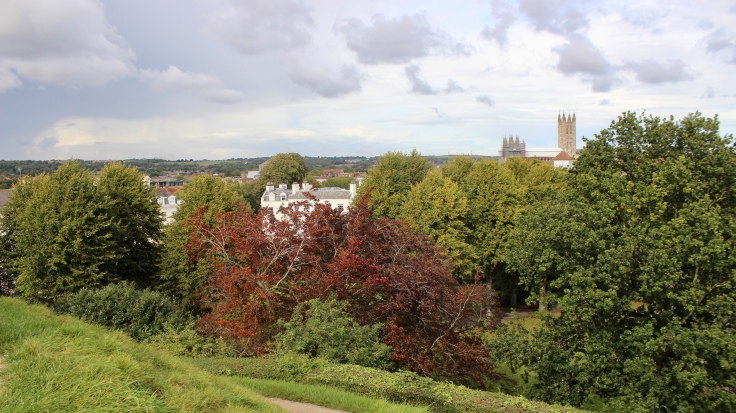 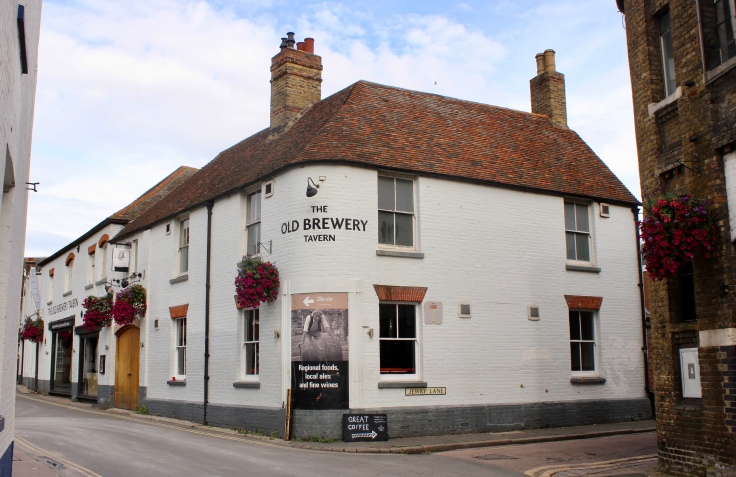 The first notable thing about Canterbury was just how old the city was, and how old some of the buildings were. The typical white houses with the black outer woodworkings, the stained glass windows, the charm of the pubs decked out in flowers – it was all so wonderfully old and British – a true delight. I forget that a lot of London burned down, and that you have to get to places like Canterbury to really appreciate the age. 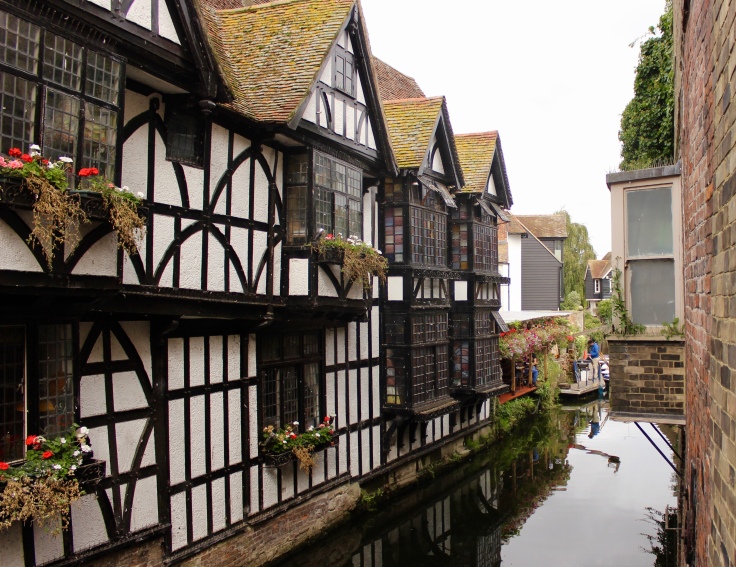 Now – before I get into the serious and important things about Canterbury, can I talk about Punting and Food ?

Punting is this thing where long, flat-bottomed passenger-carrying boats have a man/woman standing up on the back, pushing the boat along with a long skinny pole. It’s basically like paddleboarding, but instead of paddling, you’re shoving the stick on the bottom of the canal to thrust the boat forwards. It’s actually quite elegant and peaceful, and they do it on the canals in Canterbury. 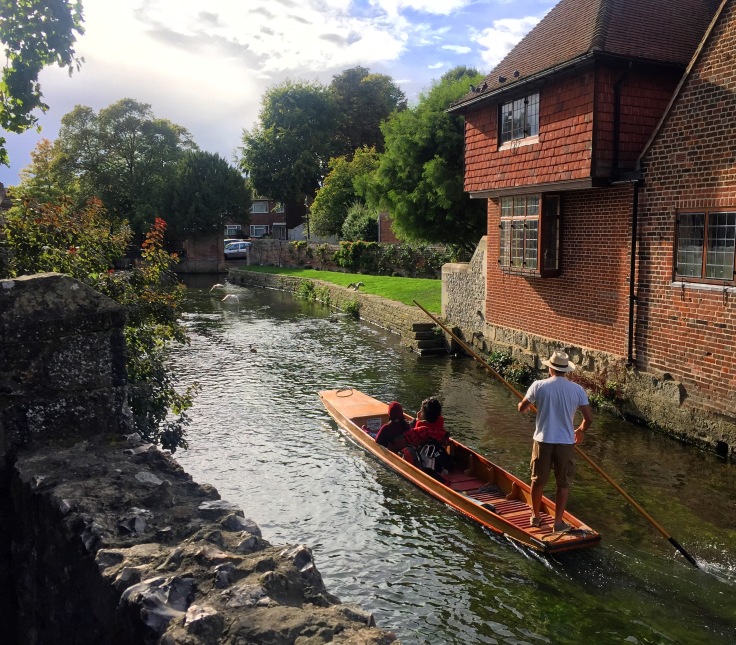 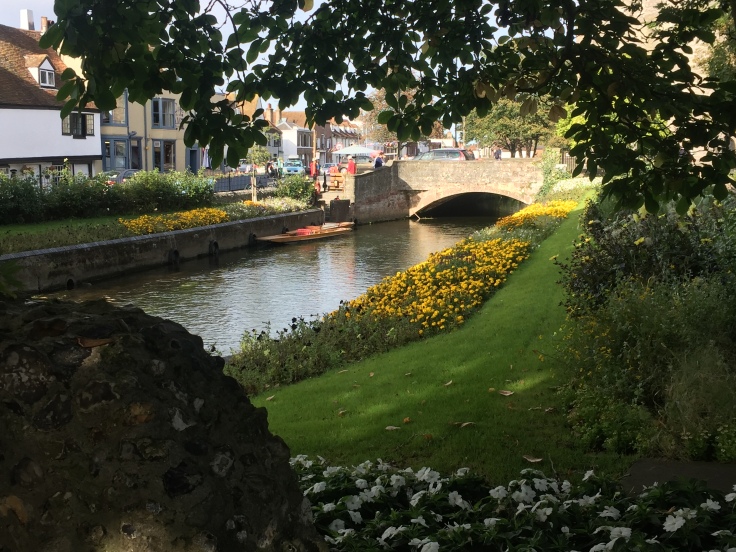 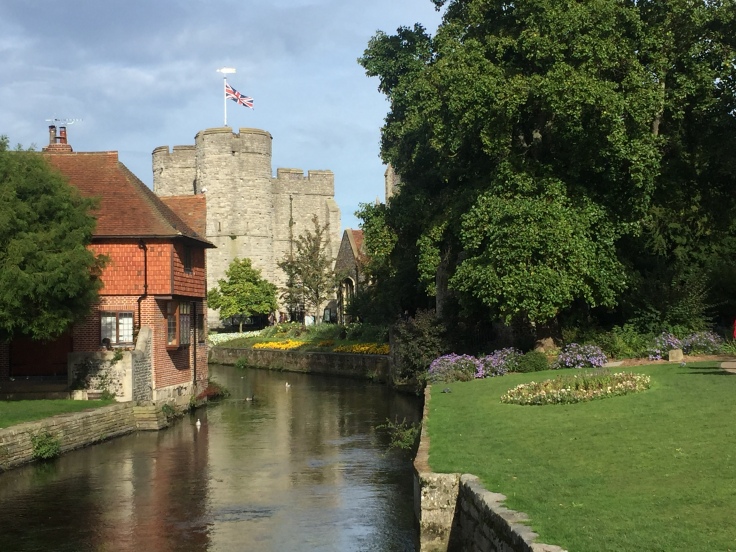 Given we went on this little trip on a Sunday, we needed to stop somewhere to get the most important meal of the week – a Sunday Roast. 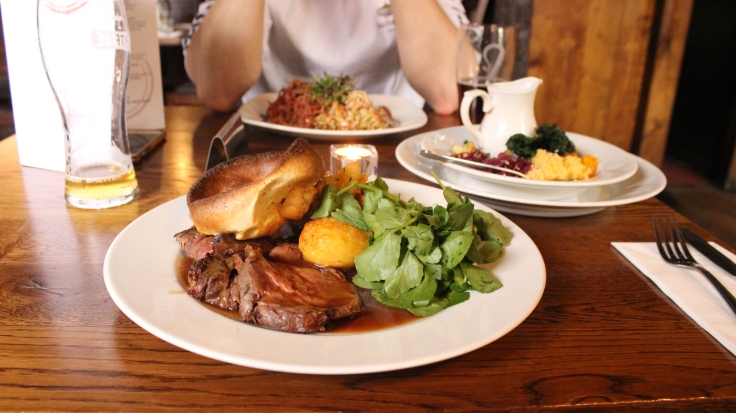 We opted for the oldest pub in Canterbury, which dates back to the early 1300s. This pub is called The Parrot, and I’d like to think it was inspired by a pirate’s friendly pet. It is super cool and super old, and such a great atmosphere. They also served beer from Shepherd Neame brewery, which is the oldest brewery in England, and local to Kent. 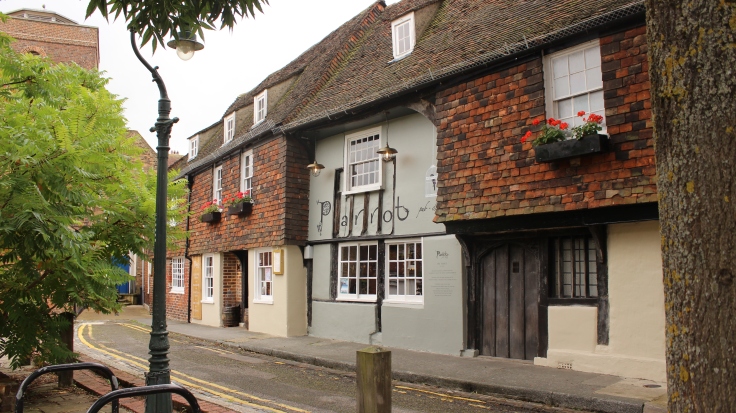 The inside of The Parrot with the old wooden beams :: 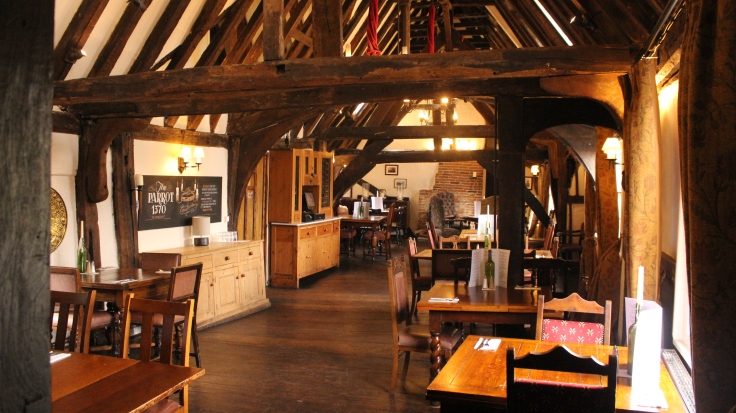 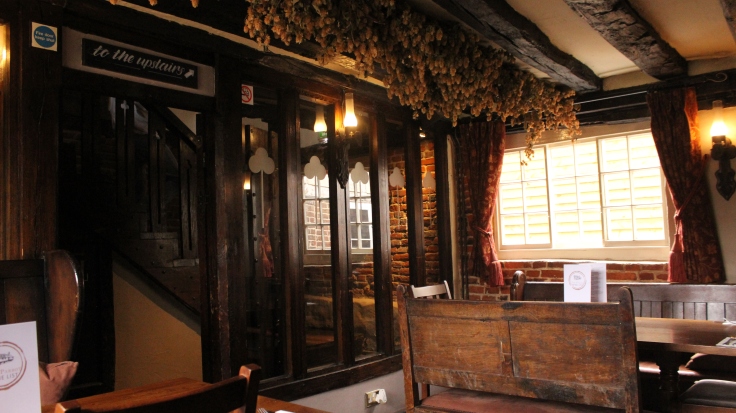 The other totally British feast activity we partook in was a visit to Tiny Tim’s Tea Room, where we indulged ourselves with pots of delicious tea with scones, jam and clotted cream. This combo is known as a “cream tea” and it is absolutely delightful. 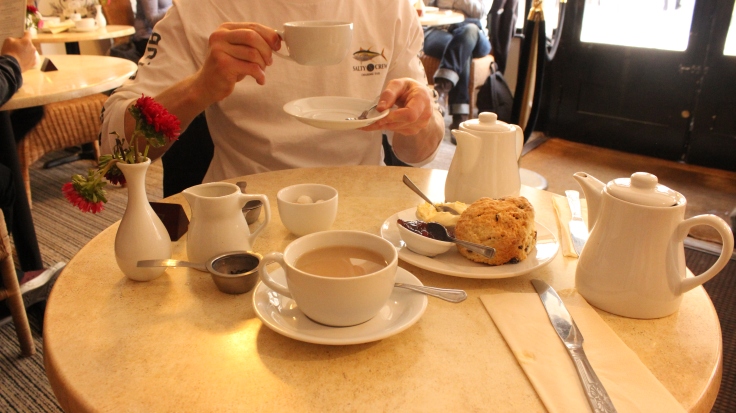 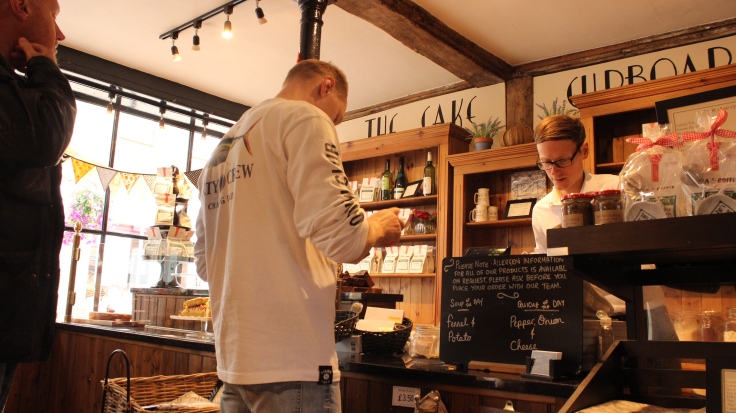 It was throughout the day that we realised the significance of our pilgrimage to Canterbury, as this route has been taken by many a traveller, especially after the death of Sir Thomas Becket in 1170.  Essentially people thought his remains, stored in the Canterbury Cathedral, could perform miracles – and people would travel from all over to pray for miracles at Sir Thomas Becket’s shrine. The tales that people told on the pilgrimage from London to Canterbury was the premise of The Canterbury Tales by Geoffrey Chaucer.

Also, random factoid – the horseback riding term “to canter” stems from the pace people would wish to ride their horses on the journey from London to Canterbury.

However, before all of this, Christianity was brought to England by Augustine in 597AD (by orders of the Pope), who became the first Archbishop of Canterbury.  I have a hard time understanding which church was first, but the 3 UNESCO World Heritage Sites are 1) St. Martin’s (claimed to be the oldest functioning church in all of England), and it’s got a great graveyard, 2) St. Augustine’s Abbey, and 3) The Canterbury Cathedral, known as “the Mother Church of the worldwide Anglican Communion.”

Without further ado, here are some holy pictures.

If you can’t tell, I love the ceilings and the stained glass — 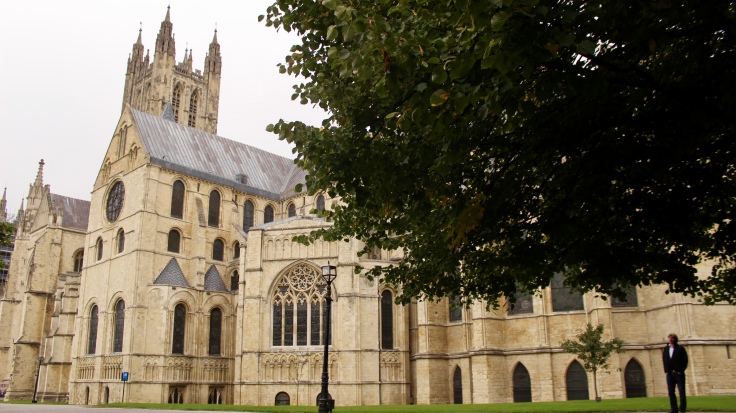 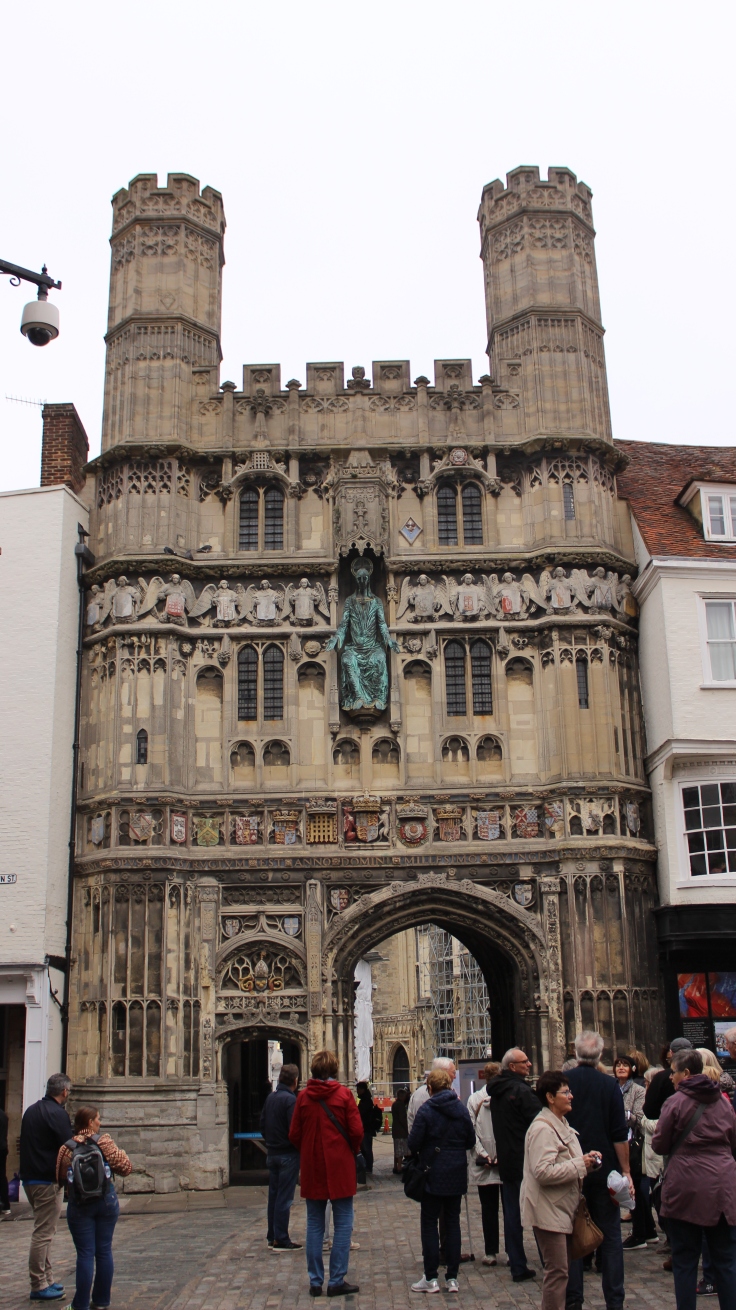 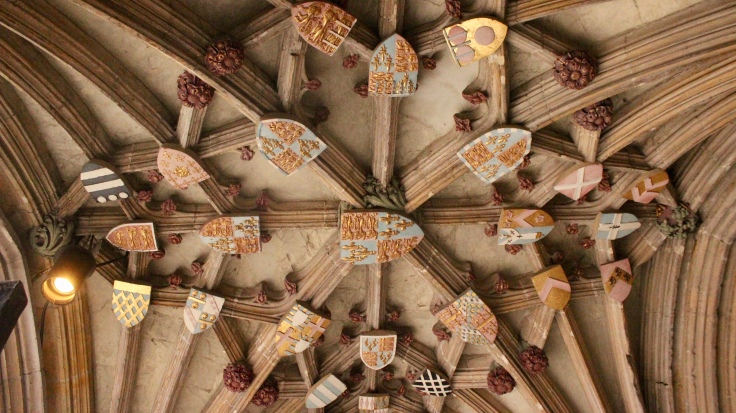 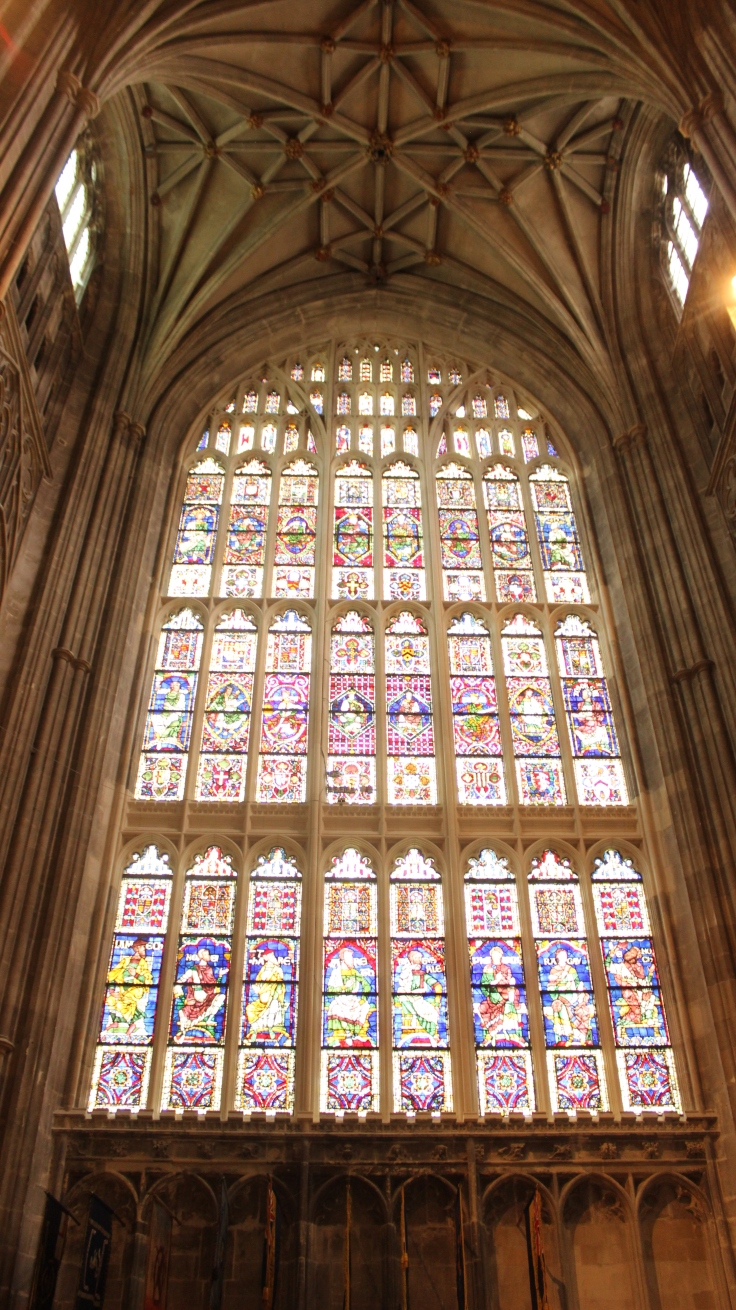 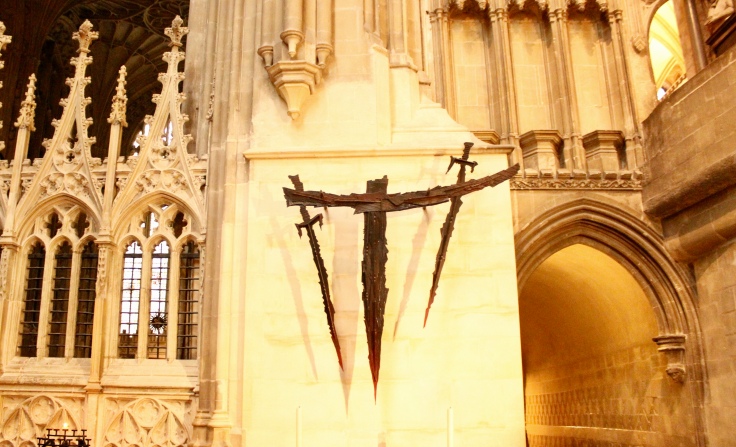 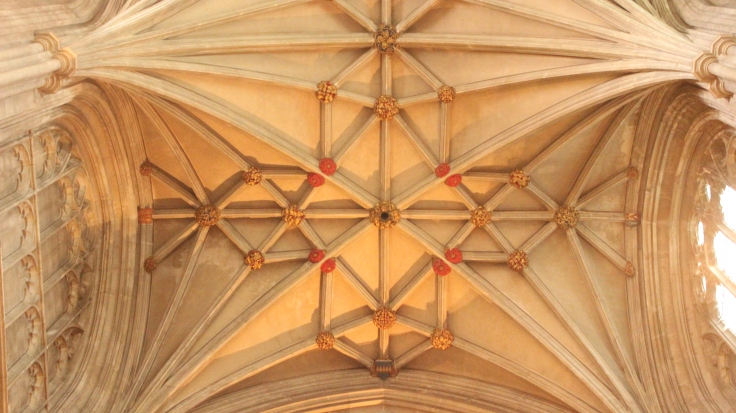 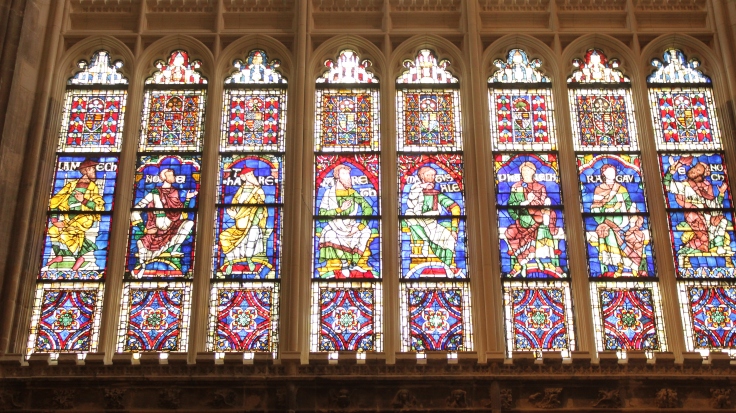 This first picture looks like Dorothy Jane is trying to escape from the grave ….!!! can you see the eyes peering out at you? SUPER CREEP! 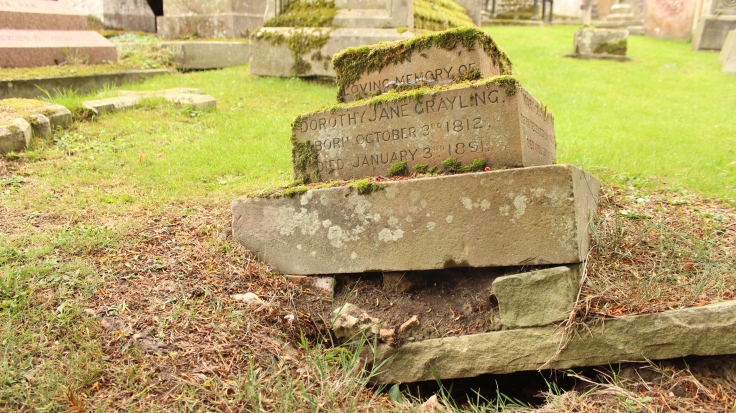 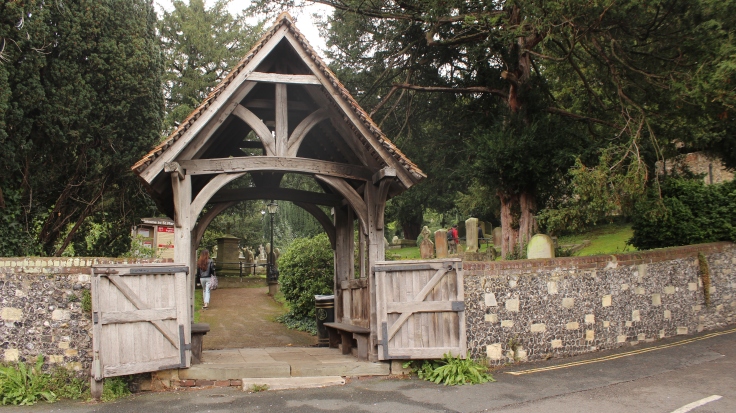 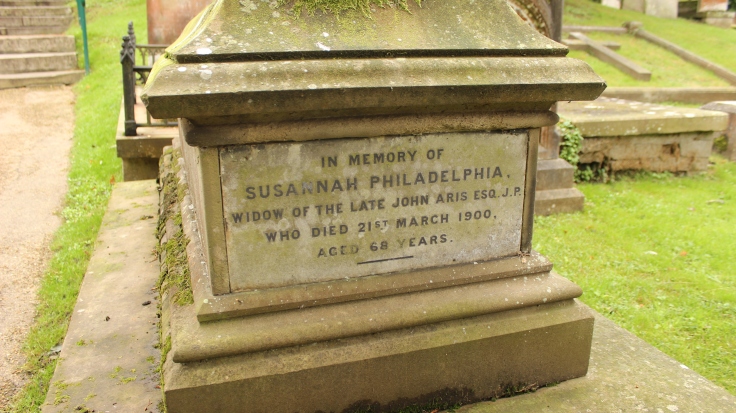 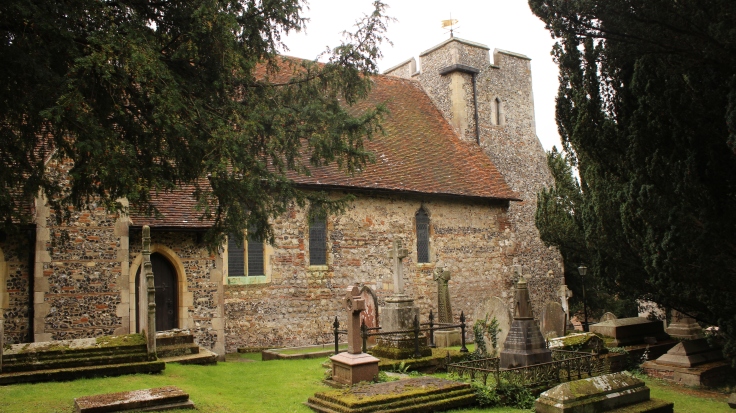